Every time that commercial comes on for Campbell's chicken noodle soup my sweet husband says "You've got nothin on my wife's soup!!". Isn't that the sweetest thing ever?! Chicken soup is something that is a time honored tradition of giving warmth, goodness, and can cure a whole lump of everything. This particular chicken noodle soup is your basic recipe, yet will just be amazing every single time you make it. I want to explore adding things like kale or spinach at the end of the cooking process, but for now I will keep making it just like this. After all, to be told that your soup is better than a brand that's been around for generations is amazing. (Though I must say that I really don't buy canned soup often. If anything I use the cream of's in casseroles but that is usually about it.) Over the last month and a half or so I have been making some sort of soup once a week. This particular soup has been made at LEAST three times! It is one that everyone loves (even with the carrots). 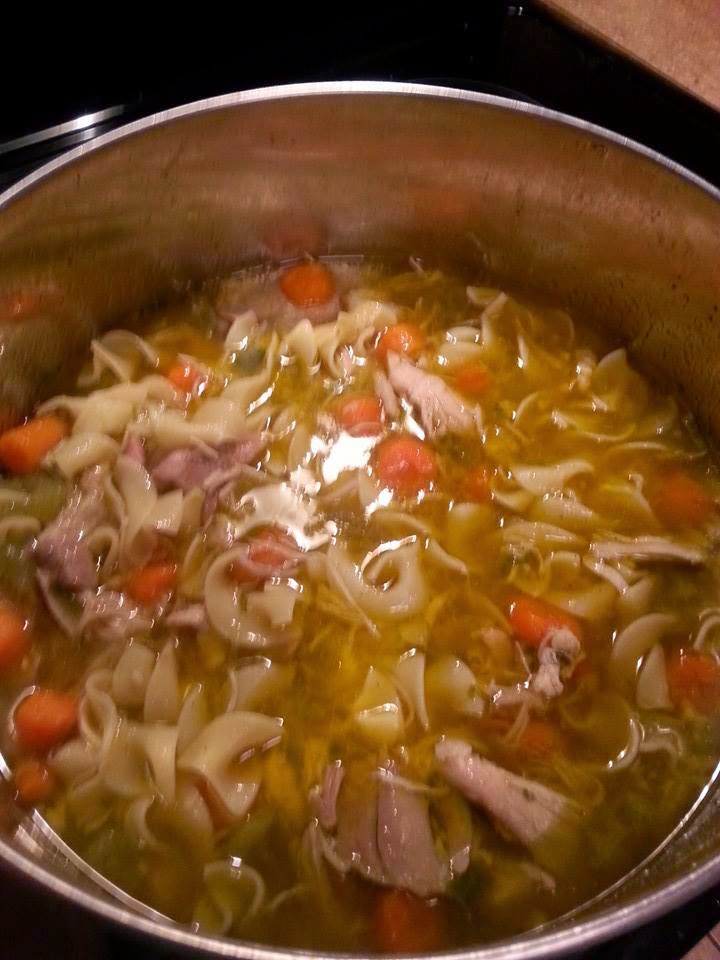 Directions
Add in stick of butter (1/2 cup) to a LARGE stock pot. When butter is melted, add in veggies and allow to saute until onions and celery get semi tender. (These will continue cooking so no need to overcook at this point.) Top with chicken, seasonings, and chicken broth. Then you are going to want to add water to a good two to three inches OVER the top of the chicken if the broth hasn't already done that. (If your unsure about the amount of liquid you can add water later. Just remember to taste it ~ after chicken has cooked for additional seasoning. No matter what I always tweak the seasonings given on any certain day. The above measurements were just a guess.) Cook on a medium boil for a good 45 minutes to an hour. Turn burner off, and remove chicken from pan. Shred and put back into pot. Bring back up to a boil and add in bag of Egg Noodles and cook for about ten more minutes. **NOTE** Adding the noodles will remove some of the liquid as the pasta absorbs some of the broth. Make sure your not stuck with just chicken mush!** Add in 4 TBS of butter and allow to melt into the broth. This will finish it off with a deliciousness that can't be replaced with anything else. Taste to season again. I like to serve this with either homemade bread or crackers. It's a good meal any time of year or health.

**IF your telling yourself that you are NOT going to put in the carrots and/or celery ~ do yourself a favor. Cut them in LARGE chunks and still cook them in the broth with the chicken, removing them before adding in noodles. That way your broth will still get some of it's flavor but you won't have to hear (or say) "But I don't like carrots/ celery". **

Posted by One Pretty Little Box at 7:40 AM