Thing Big Thursday: Are you influenced or influential? 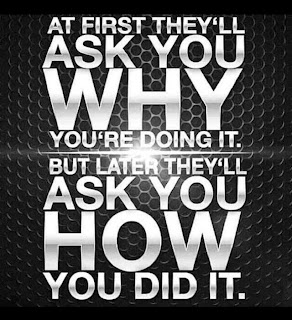 Influence is defined as having the capacity to have an effect on the character, development or behavior of someone or something, or the effect itself.

Someone who is influential utilizes that capacity with themselves to help shape people and mold outcomes in one form or another. Positive or negative.

Those who strive to be successful in their lives often start out by finding someone who influences them in the area in which they long for success. Sometimes that is all that they need to get a spark going in the right direction! Sadly though, it is easy to assume that one may no longer need influencers in their life. Mentors. We all need mentors. If we do not allow and encourage them in our lives, we will then be influenced in the opposite way.

Let's take this as an example. We are going to take an office and two "cubby mates" and watch what happens when influence is hovering around the corner (both positive AND negative). We will name them Polly (Positive Polly) and Nancy (Negative Nancy). There are three office cubbies in a row, with Polly on one end, Nancy on the other, and Meg left in the middle. Meg is someone who tries to lay low and not ruffle feathers. Polly is always trying to encourage others and has no problem helping whoever needs by teaching them how to accomplish the goal at hand as well as solve their own problems. And Nancy, who is never happy and always finds a problem before a solution.

One day Nancy called into work, so the manager on duty split Nancy's work between Meg and Polly. Together they worked to get the extra load as well as their own completed in a timely manner. The manager came in and complimented them both and treated them to lunch. Over lunch the three of them began to discuss an upcoming project and it was decided that Meg and Polly would be the great team to bring it all together and present it to their advertisers for approval. The creativity they all brought to the table was amazing, and even quiet Meg began to pipe out with ideas that were new and innovative. Over the next week, Nancy returned to work a bit surprised that the place didn't' fall apart without her. In fact it felt different when she walked in and seeing Meg and Polly interact in the way in which they were irritated Nancy. She felt out of the loop and just distracted by all the comraderee that was going on. Heck, who knew Meg could tell a joke?

The beginning of the  next week, Polly was out for a day as one of children were sick. Meg was sitting in her cubicle and Nancy was running late as usual. The manager came in frazzled and gave Polly's work load to split between Meg and Nancy. When Nancy came in, Meg told her about the extra work and Nancy began to laugh. "I am not doing her work. She should have been here!" When Meg explained that the same thing happened the week before when she was out the only response from Nancy was "Oh. Well.. that's not my problem. I am not going to do my work and someone else's work and NOT get paid for it. You can do it all." Then Nancy got on her cel phone and Meg could hear gossiping as she began to buckle down and get done what she could.

"Can you believe they want me to do someone else's job? I hate my own, why would I want to do someone elses? I do enough around here! In fact I am the best they got!" The conversation went on and the  more Nancy talked the more disturbed and saddened Meg got. Maybe Nancy was right. Maybe she shouldn't do Polly's work but concentrate on just her own. After all, she was only getting one paycheck, not two.

The next day Polly came in to a pile of work on her desk. She turned on her computer and got straight to work. When Meg came in, she said her usual "Good Morning Meg!" but Meg just barely glanced at her. After an hour or so, Nancy walked in smacking her gum smirking at the pile of things to be done on Polly's desk. "Looks like you will be too busy to make the meeting this morning!" Meg snickered as well and then went into the break room to pour another cup of coffee. Nancy looked at her calendar and realized she an hour and a half before she needed to make it to the company meeting so she buckle down and before she realized it she reached the end of her pile.

As all three of them walked into the meeting room, Nancy sat in the back of the room, while Meg sat around the middle. Polly walked up front to their management team, and placed two large files in front of them both. "Sorry I missed yesterday, but I am thankful I was able to concentrate and get this done before this meeting started." "What? As a team we expect you all to cover for one another as needed. Did it not get done yesterday?"

Meg stood up in tears. "I am so sorry!! I knew I should have done my part but when Polly began saying how she wasn't getting paid to do two jobs so wasn't going to work two jobs, it kind of rubbed off on me and made sense."

Leaving it at that.  You can draw your own conclusion as to what happens within that "team".But .. are you being influenced or are you more of an influencer? See we all are influenced in some ways UNLESS we think we already know all that we need to.

I can tell you~ I have been in the classroom with preschoolers for almost 12 years now. I learn something new every single day. I learn new ways to teach, to share information, and above all.... daily I am taught that teamwork matters! Leaders influence by action not by words.

Posted by One Pretty Little Box at 5:00 AM