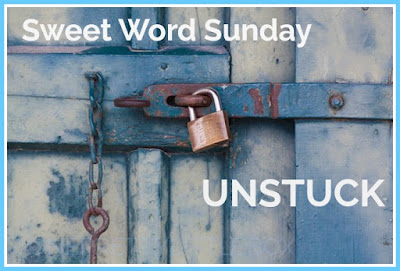 Happy Sunday! I wanted to share with you all an amazing process that I have been going through this week, and the results of that process. But first in "sweet word sunday" format, lets find out what "unstuck" means.

Unstuck is quite the funny word. And some traditionalists may even say it isn't even a real word or one might could pick a better one but oh my! Unstuck is defined in two ways. The first is being freed or loosened from being fastened. (Woah) The second is being out of order, control, or coherence; undone. (Double Woah!)

Now, as many of you know, as a Teacher  I have become accustomed to Summers off which lends to many weeks of time to get those big projects around the house done before the start of a new year. I like to tackle those things early in June so that I am freed up to do other things in July and early August. You also know that I am no longer a teacher, but however have been given a few weeks off between that career and my next.  So of course I am going to stick to my normal tradition of getting those things long put off taken care of, but I was feeling so stuck. I have mentioned before about our home situation and how it is so different right now from anytime the husband and I have been together. (That is 25 years worth of time). In that time in the summer where I am used to tackling those projects, I am also used to him being at work, not at home.

I am not sure if I shared in a blog post here, or on a video on the YouTube channel, but when your used to having time alone in your home to get things done and taken care of ~ and that time is instantly gone, you have to learn how to adapt. For me, it has taken a few weeks.

I am not a normal procrastinator or a common clutter bug but there are a few areas that really become a disaster by the of the school year. Our Master Bedroom closet and the garage are two of the biggest. This week I tackled both of those on the same day and it gave me such an elated feeling. I felt like I had been stuck in time... doing nothing for a couple of weeks, that to get those things taken care of made me feel energized and like something indeed had been loosened in my life. Perhaps it was a false belief that I can only be productive if I am alone. Perhaps it is a false belief that I should only be a busy little bee when my husband is working. Or maybe just maybe, some bitterness, fear, anxiety was loosened and released because those things are simply just paralyzing on their own ~ let alone when you feel them mixed together.

Oh but the rewards! Let me tell you something I discovered, and why I never noticed before I have no idea! But as soon as I began to really get these things taken care of ~ things I knew needed to be done but I purposely kept putting off simply because I didn't want to do them ~ something would break loose in other areas of my life. it was like each project I tackled opened up the door of opportunity, greatness, or even just hope. Do you want to know what it taught me? It taught me that I was spending a whole heck of a lot of time putting things off ~ when all I was doing was putting off blessings that could be bestowed on me, my family, or those I love.

If you find that you are being held back in life, let go of the fear, let go of the excuses and above all, let go of the procrastination!  They really are holding you back, and leaving you stuck! It's time to get unstuck and the only person that can do that for you, is you!


"Whatever you do, work heartily, as for the Lord and not for men, knowing that from the Lord you will receive the inheritance as your reward. You are serving the Lord Christ."
Colossians 3:23-24

And with that, I wish you all a very lovely Sunday & amazing week as you let go of those things that are leaving you stuck and feeling like you can't put one foot in front of the other. You can do it!